Discussion on Pedestrian Law in Washington 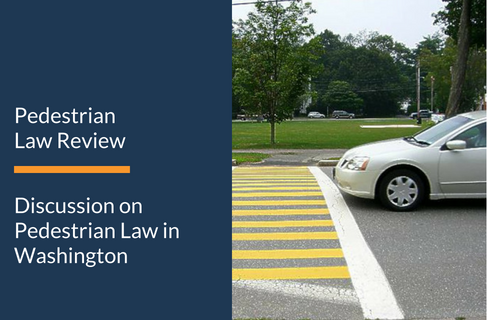 To herald in our new Pedestrian Accidents page, we’d like to have a dialogue regarding pedestrian law in Washington state. Pedestrian law is about half what most people seem to think it is, and half not quite so much what people think it is at all.

The Zone Of Safety

To offer an example, most drivers don’t know that at every intersection, there is an implied crosswalk under Washington state traffic law, regardless of whether there are white lines marking the area as a crosswalk or not. This is especially true in any suburban or residential areas. With this being the case, the pedestrian has the right of way in that crosswalk area at all times.

To continue in that same vein – pedestrians, at least according to most drivers, seem to think they have the right of way at all times. This is of course, also not true by virtue of Washington law. According to traffic law, all right of way is relative and dependent on circumstances. Case law mentions the Zone of Safety also known as the sidewalk and the curbside area. When pedestrians exit the zone of safety, and step out into the street, they are legally obligated to do so only after having taken reasonable steps to ensure their own safety.

The Zone Of Danger

In other words, the person who is walking has a responsibility to ensure that it is safe for them to enter the Zone of Danger, also known as the active street or roadway where traffic is. Once a pedestrian enters the zone of danger, legally they now have unfettered right to be there and that includes not having a legal duty to look both ways or otherwise ensure they are not struck by traffic. Once the pedestrian has established their right to be there, Washington law dictates that it then becomes incumbent on drivers to always be on the lookout for and yield to pedestrians in the zone of danger.

An example would be a situation where two lanes of traffic are traveling in one direction, one lane has stopped either to let a pedestrian cross or for whatever reason. A driver in the second lane moves forward, not seeing the pedestrian or recognizing that the traffic to that side has stopped. That driver would, in fact, be in the wrong legally, for not paying attention and being aware of what’s happening around them as they operate a motor vehicle.

Pedestrian Cases Are Complex And Full Of Gray Areas

There are gray areas, however. When a pedestrian, or bicyclist or skateboarder rides into the side of a vehicle there is an ongoing debate as to who’s at fault under those circumstances.

If You’re A Pedestrian Injured In A Car Accident, Call Us

It is important that anyone involved in such a case take care to have a personal injury attorney on their side. There are many ways they can be of assistance during a particularly difficult time. They not only hold the at-fault driver legally accountable, but they also make sure the insurance aspect is handled properly to ensure life-saving medical care is done in an expedient fashion, which is of course, more important.

Consultations with Wiener & Lambka are free and we are happy to do them, so if you have been injured as the pedestrian in a pedestrian-vehicle accident, give us a call.