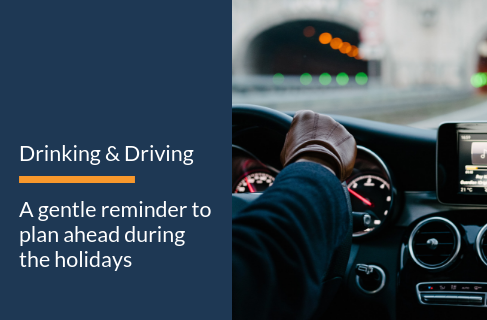 As we close out another holiday season, we would like to wish all of our clients and our audience the happiest of holidays, and our fondest wishes for a happy and healthy new year to one and all.

One of the sadder constants of the holiday season is the unfortunate spike in incidences of drunk driving and driving under the influence. So, at this time we wanted to take the opportunity to talk about an article from NPR Radio that talked about Utah and their recent change to the threshold of what constitutes impairment as measured by blood alcohol content.

Some of our younger, or not so young viewers may not remember, but it was Utah who lowered their blood alcohol limit from 0.10 to 0.08. At that time, back in 1983, it was the strictest law in the country regarding what constituted impairment. It wasn’t long however, before more states adopted the lower legal limit and soon it was the nationwide standard.

Over time it has been conclusively proven in study after study that states who lower their legal BAC limit see both a reduction in fatalities caused by drunk driving and/or driving under the influence as well as an overall reduction in the reported incidences of drunk driving.

Utah is once again leading the way again in this regard as it lowers its legal BAC from 0.08 to 0.05.

To give viewers some idea of what that translates to, a 180 lb. man needs to consume about four drinks in an hour to reach a blood alcohol content of 0.08.

That same 180 lb. man only needs to consume around two drinks in an hour to reach a BAC of 0.05. This threshold is even lower for women. This bill has been sponsored and passed with the full and tacit approval of the National Transportation Safety Board which has been urging states to lower their legal blood alcohol DUI limits to 0.05 since 2013.

As the NPR Radio article mentions, there continues to be a pervasive attitude among Americans that driving while under the influence of an intoxicant is acceptable as long as the driver is “only a little impaired” or “it’s a short distance”, or only done once in a while. While this may be statistically true, the fact remains that driving while under the influence is still breaking the law.

THERE IS NO LOGICAL REASON TO DRIVE DRUNK

Particularly in an age of cell phones, smartphones, Lyft and Uber, there is just no justification for getting behind the wheel while under the influence. Given our work with the victims of drunk driving related traffic accidents, we can attest that all it takes is one person to make a bad decision and life can change dramatically and permanently or even be lost.

The repercussions of drunk and DUI driving have been underscored so many times at this point it’s redundant to do so again, but according to a spokesperson for the American Beverage Institute, 70% of all alcohol-related fatalities are caused by someone with a BAC of 0.15 or three times the new Utah legal limit.

Getting behind the wheel while impaired can have terrible repercussions, in terms of loss of life, personal injury as well as legal and financial consequences. It is well worth taking the time to plan contingencies in case a driver should become even a little intoxicated that don’t involve operating a motor vehicle. Having a designated driver, car service or lodging accommodations worked out before drinking has started and judgment begins to lapse is essential.

Once again from all of us at the Law Offices of Wiener & Lambka, happy holidays and celebrate safely!