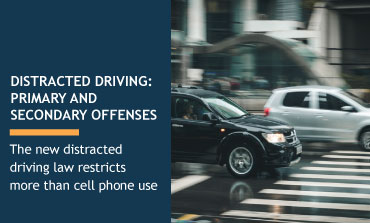 In today’s vlog, we’d like to revisit a topic we discussed in a previous blog, that being the new distracted driving law that went into effect on July 23, 2017. This law was heavily discussed both in the national media and by the public at large because of its stringent, and rather unique two-tiered system of distracted driving offense.

The new Washington state law now dictates that under no circumstances is any one to be using a hand held electronic device, or even be so much as holding a cell phone, GPS, or other such device while operating a motor vehicle. This law applies even if the driver is stopped at a red light, at an intersection or otherwise not actively operating a motor vehicle in actuality.

Barring “minimal use” hands free, or one push/one swipe operation where the driver is not compelled to look away from the road, any operation of a hand held electronic device will be prohibited by law and punishable by a $136 fine for the first offense and a $234 fine for the second. The infraction will also be reported to the driver’s insurance company and appear on the driver’s record.

A second tier of this groundbreaking legislation further dictates that should a primary offense such as an improper lane change, running a red light, failure to yield, or stop at a street sign, be objectively proven to have been caused by a distracted driving; which includes anything and everything that might remove a driver’s attention from the road whether it’s a cell phone, a pet, a sandwich, applying makeup, or even sipping a cup of coffee, this secondary offense will be subject to fines of up to an additional $99.00.

Many people have objected to this sort of double dip of a law on several grounds. Once pared down, these objectors and their arguments fall into one of three primary categories.

The brilliant and dearly departed standup comedian George Carlin had a joke where he suggested that there are really only two kinds of drivers on the road in addition to the driver themselves:

Depending on your POV, driving can be a decidedly subjective activity, and everybody genuinely believes they’re a good driver, but as anyone who drives will tell you, there are very many bad drivers out there. Laws like this are quite simply necessary to ensure that everyone uses appropriate caution and reasonable judgment when they are behind the wheel.

This Law Will Save Lives

This law, both in its intent and its application, is a deterrent to make sure that people remain mindful behind the wheel, and keep their mind and their eyes and their hands focused on the act of driving, thus keeping us all safe by preventing traffic crashes like running red lights, going through stop signs and running into the backs of cars that are sitting directly in front of the driver.

The rates of serious accidents caused by distracted driving have risen sharply in recent years, and while this is primarily a “telephone” problem it is also a matter of perspective. At Wiener & Lambka we are wholly supportive of this law and the added safety it will bring to our roads.