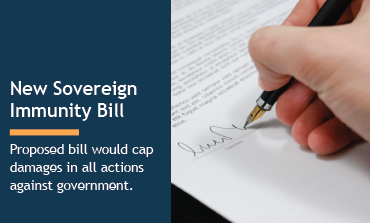 It is the basic point of this firm’s blog to provide helpful advice to people about their automobile or other insurance claim. We have not dipped into politics and don’t intend to do so. Bills that are being proposed to be made laws, however, sometimes will be addressed as these matters affect our clients’ rights. Unfortunately, there is one such bill being proposed at this time that falls into this category.

SSB 5896 is a new bill that has been introduced attempting to cap damages in all actions against government, and allow for any payment of verdicts or settlements above those damages only through legislative appropriation by the appropriating body of the entity responsible for causing the harm. This bill has been written into the Republican Senate budget and will be considered necessary to implement the budget by the Republicans. We believe that this bill will substantially erode individuals who have been the most harmed by governmental negligence from being treated fairly and receiving justice.

In the not so distant past, sovereign immunity meant that the government could simply not be sued if it did someone a wrong, no matter how bad the harm or the actions were. Since that time the laws have struggled with balancing the amount of immunity that a governmental entity should enjoy. This law simply goes too far in terms of limiting the ability of an injured party or parties to obtain fair redress from a Washington governmental entity.

This proposed law provides for a cap of all noneconomic damages of $1.5 million per claim, and $2 million per incident.

We believe this law would provide the governmental entities of Washington with too little incentive to make sure that they do their jobs properly in terms of areas where they have a legal duty to keep vulnerable citizens safe. This bill targets the most egregiously injured and damaged people in our society. Permanently disabled children, people rendered quadriplegics, victims of horrible crimes, families who may have lost a parent through a wrongful death. This is an attempt to balance the budget on the backs of innocent victims permanently damaged or killed because of a failure by government agencies.

This bill puts government above the law and above the reach of the jury system, and makes itself the judge and jury of their own actions. This flies in the face of government accountability and dishonors the State Constitutional mandate that the right to trial by jury remain “inviolate.”

The direct compensation of these victims by the entity causing the harm acts as an incentive to improve safety and, in the case of, for example, DSHS, to ensure they are protecting children from harm.  This limitation is the same as a disincentive to make corrections for improved safety if they would cost more than 1.5M.  This allows for the government to simply make a mathematical calculation about the potential for harms versus the money to be spent preventing those harms and deem certain losses to be “acceptable.”

Because we believe this to be an unfair proposal that adversely affects the people who are our client base, we hope that you will agree that it is not a good proposal. Please contact your State Senator and/or Representative to ensure that they are not supportive of this biased proposal.