Norwegian Study on Personality Types and Distracted Driving – Are You Likely to Be Distracted? 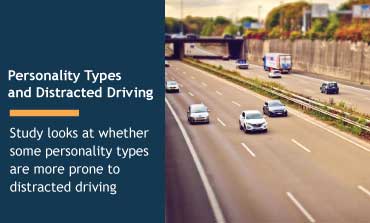 Distracted Driving has increasingly been recognized as a serious problem on our roadways. Washington State has passed a new law more strictly regulating the use of telephones, and other items, while driving. See our video post on this here. Failing to keep one’s eyes on the road, even for something as simple as changing the radio station, can have tragic consequences.

The National Highway Transportation Safety Administration has found that two seconds of inattention has accounted for 14 percent of the automobile accidents in the United States.

Researchers in Norway, looked into the idea of whether or not they could identify personality types of people who were more prone to distracted driving.

The study looks at the driving habits and personalities of hundreds of Norwegian high schoolers and adults and concluded that young men were among the most likely to report distraction due to phones, but also people talking in the car or flipping through the radio dial. The study found that the more distraction-prone included frequent drivers, and those with neurotic and extroverted personalities.

The study is likely limited in getting to the bottom of exactly who is at most risk for distracted driving because it relies upon self-reporting of individuals and there is a likelihood of under-reporting in these circumstances. Nonetheless, any spotlight on this subject that makes drivers assess how they can best limit these distractions so as to avoid accidents is a positive step forward to reducing this serious problem. Fifteen states have banned talking on a handheld phone while driving and 47 have texting bans.

Ole Johasson, one of the researchers, points out, “It’s not just cell phones that are drawing our eyes away from the road. Sometimes it’s just someone talking inside the car”. “Distracting factors are closely related to attention,” the study says. “As the task of driving a vehicle is mostly taxing on the systems of visual attention, any factor that draws the gaze away from the road for a significant period of time could be classified as a distractor.”

The article upon which this post is based can be found here.