Washington State Patrol cracking down on distracted drivers over Fourth of July weekend; know what’s legal and what isn’t. 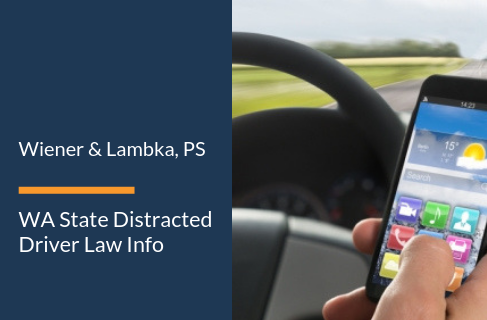 Put down your phone!

The Washington State Patrol will be looking for distracted drivers around the state during an emphasis patrol Friday through Sunday. The state is on a mission to reduce traffic deaths to zero by 2030 and, to that end, has launched a number of public safety and education initiatives aimed at changing drivers’ behaviors. Distracted driving causes 30% of statewide traffic fatalities and 23% of all serious injury collisions in Washington, according to the Washington Traffic Safety Commission, “There is no call, text, email or update that is worth a life, yours or the person in the car you hit,” Patrol Chief John Batiste said in a statement. “Drivers, please pay attention. You matter and we want you to arrive at your destination safely.”

Last year, the State Patrol pulled over 20,000 distracted drivers, 3,000 more than in the previous year, the Patrol said in a statement. State law prohibits drivers from using personal electronic devices — such as cellphones, laptops, tablets and gaming devices — while operating a motor vehicle on a public highway, even when stopped in traffic or at a traffic light. Drivers are allowed to activate, deactivate or initiate a function on the device only if it requires minimal use of a finger, the Patrol said.

Drivers can, however, use a device if:

•It’s a hands-free device that can be started with the single touch or swipe of a finger.
•The driver is parked or stopped, completely out of the flow of traffic and safely off of the roadway.
•The driver is calling 911.

The penalty for distracted driving is a $136 citation for the first offense; a second offense within five years raises the penalty to at least $234. Each offense is reported to insurance companies.
This article originally reporting this can be found here.

Remember – safety first! You never know who is driving on the road with you. If two drivers who are both distracted meet each other on the road, the reaction time reduction for both of them could spell disaster – serious injury or even death. Moving as slow as 20 MPH in a 3000 pound vehicle directly towards a similar vehicle going at the same speed, bracing for impact won’t help you much since you’re effectively ramming into a car at 40MPH. So, moving slow, and playing it “safe” is no excuse not to respect the guidelines.

Whiplash, cuts and knee injuries are some of the most common injuries drivers sustain in vehicle incidents and can continue to cause trouble later in life. Remember that even though an airbag is there to save your life, hitting one with your face is by no means a pleasant experience and could even cause injury by itself. For example, sudden head movements while chewing a chewing gum could cause it to end up in your air pipe, which happens more often than you think.

Our suggestion is to minimize the usage of distracting technology even if some of it is legally allowed, such as using a hands-free device in a moving vehicle. What people are not aware of is that our ability to multitask varies due to a combination of factors. If you combine tiredness, fatigue, or morning drowsiness with a distracting element, that’s a recipe for disaster.

If you have been in a car crash in Washington State, call Wiener&Lambka today and get a free consultation with a local lawyer who can help your case in the best possible way and tell you exactly what to do to get the best possible outcome.