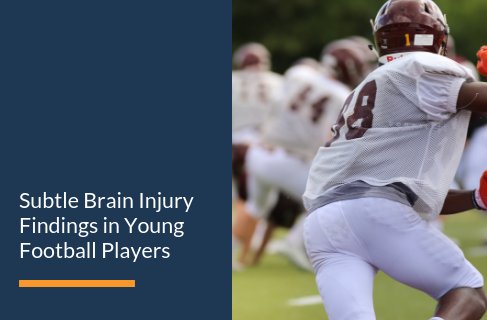 A new study indicates that only a single season of playing football can alter a young athlete’s brain chemistry.

The findings are preliminary, but research using MRI scans to look at the brains of 26 football players – all 12 years of age – showed that nerve bundles in an area of the brain critical to integrating cognitive, motor and sensory functions had been shortened or contracted, following one season of football.  Additionally, 26 other 12 year-olds who didn’t play football did not have these MRI findings.

Because brain development is critical at age 12, the findings suggest concerns over playing a sport involving repeated blows to the head, or jostling of the head, that can potentially disrupt appropriate brain development. The research in general on brain injury is demonstrating that while concussions can certainly cause brain injury, non-concussive events repeated over time, can also cause problems. In the later case, there would be no reason for medical intervention and any damage that occurs would be unlikely to manifest itself in an objective sign.

The authors of the study have not yet published their findings in a peer-reviewed journal nor do they know the answer to the most pressing question –  whether or not there are long term health consequences to their findings.

This blog post was derived from an article on NPR regarding the study. You can find that article here.