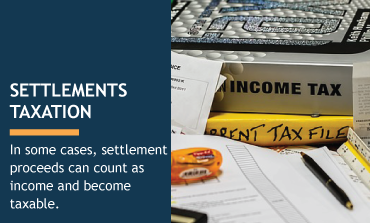 In general, there is no taxation on the proceeds of a personal injury settlement, but each settlement could have aspects of it that do count as income.

The internal revenue code section 104(a)(2) indicates that damages based on “physical injuries or physical sickness” are exempt from being counted as “income” and therefore are commonly referred to as not being taxable.

Like everything in the law and the Internal revenue code, however, there are exceptions.

If, for example, you receive as part of your settlement reimbursement for medical expenses that you had deducted as expenses in a previous year, then those payments should now be counted as income.

If you receive a settlement that provides you with monies representing lost wages or lost profits then that portion of the proceeds are seen as taxable wages and subject to social security wage base and social security and medicare tax rates in effect in the year paid.. Also, they are subject to employment tax withholding by the payor and should be reported by you as “wages, salaries, tips. etc.” Lost profits may be taxable as “business income.”

In practice, settlement amounts are generally not divided up into these categories by neither the payor nor the recipient. Personal injury settlements are typically provided in one lump sum check. It is therefore up to each recipient to determine how to report the income to the IRS.