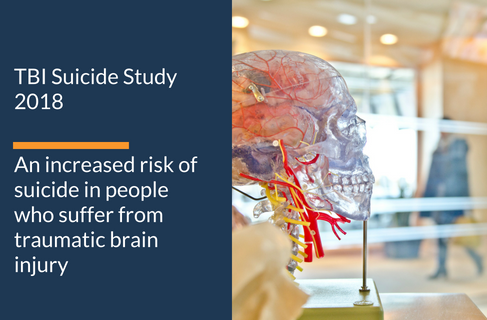 A new study published in the Journal of the American Medical Association found that there is an increased risk of suicide in people who have suffered a traumatic brain injury.

Researchers in Denmark examined 34,529 suicide deaths over a 35 year period. They found that people who have suffered traumatic brain injuries have almost double the risk of suicide than people who have not suffered from that condition. Additionally, the more severe the injury, the more likely that suicide can be the ultimate end for the person with TBI.

The study doesn’t answer a lot of questions about exactly why these numbers exist, but it is another consistent example that the long term impacts of brain injury are both difficult to understand and generally very troubling. Key takeaways are similar to other studies and include that the public and medical community need to do a much better job of identifying traumatic brain injuries earlier and providing medical intervention in a timely manner. Also, providers and family members need to recognize that when a person suffers a TBI that the person’s brain no longer works exactly as it did before the injuries. While in many cases, these changes will be hard to notice, and the brain will re-wire in a manner that doesn’t cause a great impact on the injured patient, there are a large number of cases where the patient is simply no longer the same version of themselves. This can cause an immense amount frustration and psychological injury to the affected person. Our brains are the conduit for how we process the world and present ourselves to the world. If that conduit changes, so do our perceptions of what the world is like and who we are.