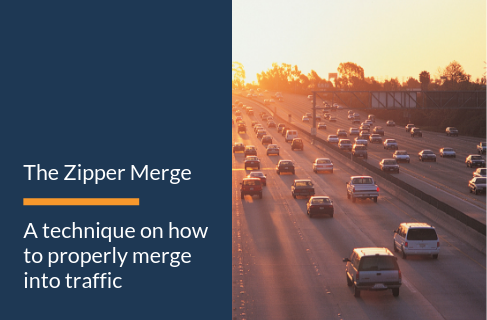 A bill is being proposed in the Washington Legislature to fund additional education to teach students in driver’s ed how to properly merge into traffic, using “The Zipper Merge” technique.

Road Rage And The Zipper Merge

Having spoken before about the dangers of road rage, we cannot stress enough how effective proper zipper merging can be for diminishing road rage and facilitating a greater flow of traffic. Zipper merging refers to the areas designed to keep traffic moving when road construction, an automobile crash, or simply just roadway design force two lanes to become one, or “merge.”

During a zipper merge, drivers use both lanes fully until they come to the point where one lane ends at which time cars on the closing lane take turns entering the main flow of traffic.

A lot of people assume that the correct procedure is to get immediately into the flow of traffic upon seeing a lane ending. In heavy traffic, they may even slow down, signal and try to get into the destination lane long before the merge point. While this may feel like the right and correct course of action, the proper use of the zipper merge requires proceeding to the very end of the merge lane, then alternating entry into the primary lane with other drivers.

One Exception To The Rule – Light Traffic

Whereas in light traffic it may well be possible to enter the primary lane early, in moderate to heavy traffic it is best to use both lanes right up to the merge point.

How Effective Is The Zipper Merge

When done properly, a zipper merge can reduce backups by up to forty percent, which leads to smoothly flowing traffic, happier drivers and thus fewer incidents of road rage. When done improperly, it can lead not just to road rage but miscommunication between lanes and car accidents as well. And we all know that an added car accident is going to slow traffic even more!

Rules To Live By

In closing, the law offices of Wiener & Lambka would like to encourage you to always keep calm, drive defensively, and to always be considerate of your fellow motorists.

Check out the video for first-hand information from a car accident lawyer at Wiener & Lambka PS: