Washington Amtrak Investigation Focuses On Failure To Use Available Technology 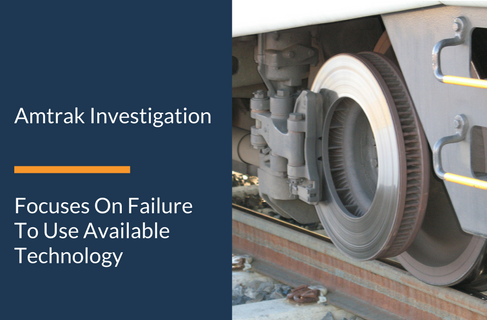 Following the Philadelphia Amtrak derailment, a couple of years ago, the recent Washington State derailment has brought up again the issue of why Amtrak has failed to implement existing technology that could have prevented the crash.

The National Transportation Safety Board said in a preliminary report that the December 18 derailment of an Amtrak Cascades train was due to it speeding as it approached a curve.  For several years, the effort to implement technology known as positive train control, or PTC, that can automatically activate brakes on trains in over-speed situations, has failed to result in the actual placement of this crash-averting technology.
Congress mandated that passenger and freight railroads install PTC by the end of 2015 when it passed the Rail Safety Improvement Act in 2008.  Railroad lobbyists, however, were successful in having Congress extend that deadline to December 31, 2018.

Sound Transit is the Seattle-area public transit agency that owns the stretch of track on which the derailment occurred while Amtrak operates the passenger rail service.

Following the Amtrak incident, U.S. Transportation Secretary Elaine Chao sent letters to railroads urging them to take all possible measures to ensure they will meet the year-end deadline to install PTC.

Amtrak, as a common carrier, has the highest civil legal duty to insure the safety of its passengers.  Amtrak has already been sued by some of the victims of this deadly crash.  Also, there is a $295 million dollar cap on damages for any one railroad incident.  This means that if the value of all of the claims made exceeds that amount, then the parties seeking compensation will have to go through a different claims process that seeks to fairly allocate the monies available to all injured persons.