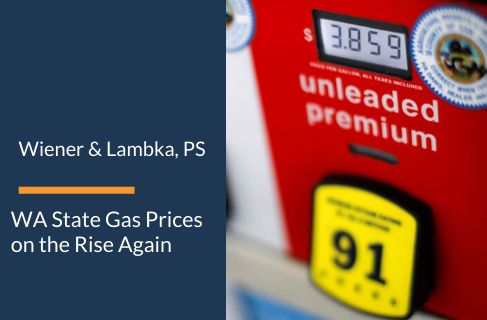 Gas prices in Washington State are rising while prices nationwide are dropping. A recent survey conducted by GasBuddy found that in the last week alone, the average price of gas in Seattle has risen 5 cents a gallon, while gasoline prices nationwide have dropped by 2.4 cents.

Is The Average Relevant To You?

The short answer is – no. The average price should be looked at as an indicator of the condition of the whole industry, but for any single individual, it’s more important to know your local area. Where you live and where you usually fill your gas tank can be a big money drain or a money-saver.

In Washington state as a whole, the average gas price is up 4.4 cents per gallon, however, this is still about 13 cents lower at the same time last year. The study’s authors stated that gas prices in Washington state should start dropping in the weeks ahead, along with the rest of the nation, now that refinery issues are being resolved on the West Coast.

However, the authors have also noted that there is a significant difference between the cheapest and most expensive gas stations in the wider Seattle area. This discrepancy can be explained by multiple factors, from gas quality to location, competition, delivery schedules, and real estate prices.

The cheapest gas station at the moment the study was conducted had a price of $2.97 per gallon, while the most expensive one was sporting prices up to $4.49 per gallon, a whopping $1.52 difference per gallon.

Why Are Gas Prices Going Up in Washington State ?

The trade “war” with China has also made a huge impact on the price of all commodities in the US and globally, so don’t think the US is the only one suffering a hit. However, some of the issues we’re facing are purely local and US-specific. We’ll be talking about all of them below

Ever since March of 2019, fires have been slicing production at America’s third-largest refinery, near Houston, and at a big facility in Los Angeles.

California-based refineries have a major influence on the gas prices in the Western US and have been known to have almost instantaneous impacts on local prices. One of the reasons is that most of this gasoline is produced within the state to meet the strict anti-smog standards.

With less crude oil, the prices naturally climb. OPEC countries have been working towards reducing production by around 1.2 million barrels per day.

Oil contracts are dollar-based, so when the dollar falls in value, the oil prices rise. With a weaker dollar, the oil producers and exporters are making less money for their work, so they compensate by increasing oil prices.

Oil and the dollar are deeply interconnected and one cannot rise or fall without influencing the value of the other.

With more Americans hitting the road at the same time when there’s a reduction in supply, it’s natural to assume that prices will continue going up on average in the coming weeks, at least until the Texas and California refineries have been put back on track.

We would like to remind you to drive safely during the winter and respect the rules of the upcoming weather. Wiener&Lambka is there to help you if you’ve had an accident on the road – our experienced lawyers can help you get the best possible outcome, whether you’re a victim of a pedestrian accident, car accident, motorcycle accident, or if you need a truck accident lawyer.