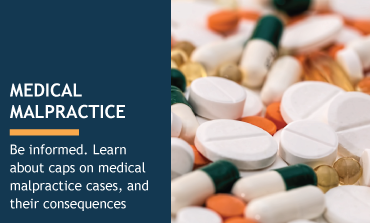 For well over 20 years now, the Federal legislature has worked to place caps on medical malpractice lawsuits at $250,000 over and above medical costs. The rationale for such a grossly unfair law is framed as emphasizing the fact that medical costs should always be compensated for, but that all other damages should be capped at $250,000, including effects of the injury on the life of the victim, including pain and suffering.

When viewed out of context, such a law might seem reasonable, but upon closer examination, it becomes very clear that it is not.

The Painful Case Of Khaliah Shaw

To illustrate the shortcomings of this law, please consider the case of Khaliah Shaw, a 25-year-old woman from Atlanta, GA who visited a doctor for symptoms related to depression.

She was an energetic young college graduate who claims her entire life was derailed due to the medication she was prescribed triggering a rare autoimmune illness called Stevens-Johnson syndrome. This syndrome occurs during an adverse reaction to or overdose of certain medications, including the one prescribed to Khaliah for her depression.

How Much Worse Did Her Condition Get?

A lot worse than just depression! The reaction was extreme, Khaliah’s skin literally melted off, a condition so severe she had to be placed into a medically induced coma for five weeks. “I was in excruciating pain,” she describes. “It felt like I was on fire.”

Because of this one moment of negligence and unprofessional conduct, her medical bills topped 3.5 million dollars and continue to build. She is profoundly scarred as the skin she lost will never grow back. Her sweat glands melted, and she lost her fingernails. She is losing her sight, and worse, her condition could worsen, and her symptoms could return at any time.

Khaliah’s life has been irrevocably altered. She no longer recognizes the woman she once was and knows her condition will continue to deteriorate. The suffering she has endured and will continue to endure is unimaginable by the standards of most Americans.

If negligence is in fact found, the idea of capping non-medical damages for Khaliah is both egregious and unjust.

Medical Error: 3rd Leading Cause Of Death In The United States

According to a 2018 Johns Hopkins study, medical mistakes are now the third leading cause of death in the U.S. behind heart disease and cancer respectively, killing more than 250,000 people per year. The numbers cited are voluntary and indicates the true number is vastly higher.

Caps On Medical Malpractice Are Unfair And Unjust

When these things are considered, it becomes very clear that allowing insurance companies and corporations to set limits on medical malpractice cases is extremely unfair. The people this law would attack are people who are at their most vulnerable.

The general public can’t make informed decisions regarding medical care without turning to medical professionals; doctors and pharmacists, we literally put our lives in their hands.

If the doctor or pharmacist cannot do their job in a non-negligent manner and without causing harm, it is important that people be able to collect on all of the damage inflicted upon them as a result of subpar care or lack of care, by a medical professional. This is not a money decision; this is a decision of morality and public safety.

Medical Malpractice Laws Should Be There To Protect The People

People need to know they are covered in case the professionals in whom they’ve placed their well being fail to live up to a rigorous standard of competency and they are injured as a result.

We are expecting our expensive healthcare system to protect us and help us when we need it to. That’s currently not the case if the doctors start cutting corners.

In this video, James Lambka explains why we need an uncapped medical malpractice legislative framework, and how you can protect yourself or ask for help: